A Simple Model for Undergraduate Research in Statistics

Our statistics majors at St. John Fisher College are required to do a research project as the capstone element of their bachelor’s degree. As much as possible we let the research focus be student-driven so that it reflects the student’s abilities and interests. Over the last several years the research projects have clustered pretty naturally into two types: statistical research and data scientific research.

Projects of this type involve basic statistical research, and can come in several forms:

Statistical research draws on several content areas of the undergraduate’s major studies, including the mathematical underpinnings of statistics, theoretical aspects of statistics, and Monte Carlo methods. Research problems of this type should be grounded in past work, and therefore require substantial literature review. Assessments of statistical research projects generally target outcomes such as: problem statement development, literature review quality, mastery of Monte Carlo or other appropriate simulation methods, general coding skill, and quality of the final paper and/or presentation.

From our experience, students who are a good fit for basic statistical research:

Projects of this type involve applying statistical methods to disciplinary questions using disciplinary data, and can come in several forms:

Research of this type requires both an interest in disciplinary questions, and the computing skills to find useful data and render it into an analyzable form.

Assessments of data scientific research projects focus on outcomes such as: appropriateness and innovativeness of the data source; quality of the data wrangling, visualization, or modeling work; and literacy of the disciplinary concepts relevant to the project.

From our experience, students who are a good fit for data scientific research:

A Survey of Statistical Capstone Projects Bruce Blaine, Ph.D., PStat® is an applied statistician and Professor of Statistics and Data Sciences in the Department of Mathematics, Computer Science, and Statistics at St. John Fisher College. He currently serves as Vice-Chair of the MCS Division. Dr. Blaine’s research and professional interests include variance heterogeneity, meta-analysis, robust and nonparametric statistical methods, statistical consulting, and statistical computing with R. There are many potential goals undergraduate research mentors have for their students when leading a mathematics REU project. Students might learn new math, prove new theorems, and write and publish a paper. Less tangible, but equally important, are the transferable skills that students develop. Students can improve their mathematical writing (see Allison’s post on this), their collaborative and independent learning, and their presentation skills. One of the stated goals of Summer Undergraduate Math Research at Yale (SUMRY) is to help students improve their oral presentation of mathematics, and we will explore how we work to achieve this.

We hope to improve the presentation skills of all students, regardless of what skills and anxieties they bring with them, and we believe that early and frequent presentations of their mathematical progress and results help accomplish this goal.

We know students enter an REU with a wide array of mathematical backgrounds, but they also enter with diverse writing, learning, and oral presentation skills. While most students have the shared experience of presenting a homework problem in class, some students might have been star members of a debate team while others fear public speaking. We hope to improve the presentation skills of all students, regardless of what skills and anxieties they bring with them, and we believe that early and frequent presentations of their mathematical progress and results help accomplish this goal.

Starting in the third week of SUMRY, we have each group give weekly twenty-minute presentations. These usually start as chalk talks and switch to projected PowerPoint or \(\LaTeX\)-ed Beamer talks later in the summer. At first, these presentations are rough, with students maybe defining relevant objects and stating open questions; these presentations are polished throughout the summer and become worthy of professional conferences. This transformation does not occur by magic, but instead through constant feedback from mentors and other audience members. Mentors understand that even if they themselves do not enjoy presenting, their experience listening to and evaluating presentations is valuable to their students. In addition to advising on presentation content, mentors help students develop and incorporate best practices, such as erasing the board completely, addressing the audience, and using more images and fewer words on slides. Peers and other audience members are also excellent resources for feedback. They help speakers learn which ideas have been clearly explained and which explanations need improvement. It is through a constant conversation around presenting that students improve throughout the summer.

Of course with so many presentations, we need many audiences. In previous summers, students felt as though they were attending so many talks that they did not have time for mathematics. We now have bilateral presentations, where groups are paired each week and present only to each other. The smaller audience allows for more questions and engagement, and this arrangement facilitates feedback for the presenters. Students present to larger audiences when they travel to REU conferences such as the Young Mathematicians Conference (YMC), and also at workshops hosted by Yale. During the last week of the program, we have final presentations where students present to the entire cohort; this serves as a wonderful venue to celebrate our students, their work, and the summer.

This past SUMRY, I mentored a group of students exploring closed geodesics on translation surfaces. By the middle of the summer, they had honed a presentation of their results and traveled to present at their first conference. Coincidentally, the colloquium speaker who visited Yale the day after the students returned from the conference was an expert in this same field. After her talk, the students successfully engaged the speaker in an impromptu presentation of their results. This prompted a detailed discussion of their project with the speaker that led to new research questions and new ideas for how to approach them. By improving their ability to present mathematics verbally, these students experienced firsthand that communicating mathematics is an integral part of the research process. Ian Adelstein is a Lecturer in the Department of Mathematics at Yale University. He has mentored several undergraduate research projects in geometry, mostly through Summer Undergraduate Mathematics Research at Yale (SUMRY), an REU program that he directs. In addition to mathematics, he believes that REUs should foster community, and always budgets plenty of money for pizza.

How I Learned To Help Undergraduate Students Write Collaboratively

When an undergraduate student progresses through their first research project, the new skills they are required to develop along the way can be daunting. In mathematics, students need to learn how to: ask good questions, make and test conjectures, find research relevant to their questions, present their findings in a professional setting, and write up their results. This last aspect is often de-emphasized, left for the very end of the project, to be completed in a mad dash. The results are often sloppy at best, completely disjointed and incomprehensible at worst. I know; I have personally struggled with this issue over the years.

In my first experience as an undergraduate research mentor, I had an unusually strong, well-prepared group of students. They were self-motivated to write up their results early and often, and they produced two (yes, two!) publishable papers which were submitted to journals during the last few days of our summer research program, with relatively little guidance from me. I thought this is what all students would do naturally, so I did very little mentoring of the writing process with my next groups of students. As a consequence, one of my next groups never actually wrote up their results. Another group of students wrote up results, but when I went to edit the writing to elevate it to a publishable level, it took me (literally!) years of hair-pulling revising to reach this goal. And improving this group’s writing was by far the least favorite part of my job at the time. Something had to change.

After these experiences, I began to request regular drafts of written results early in the research process. I would ask students to hand me their papers, dutifully mark them up with red ink, and hand them back to the students for revising. However, while my students would attempt to incorporate some of my suggested edits, their revised drafts did not significantly improve. Students would misunderstand my comments and would even ignore suggestions I had painstakingly scribbled in their paper draft’s narrow margins.

One summer, I tried something new. During the first week of the research process, I asked my students to start writing up their results in a shared Overleaf document using the typesetting software \(\LaTeX\). I then requested that they meet with me weekly for a joint editing session; I booked a room with a projector each week for this one- to two-hour session. When we met, one of the students would project their paper for all of us to see. They would then plant themselves at the computer, ready to implement the edits we’d discuss in real time. Other students might view the paper on their laptops to help with edits or just to simply follow along and make suggestions.

With this new process in place, I’d lead us through their writing, analyzing each line. If a line introduced a definition that wasn’t worded quite right, I might suggest, “In our field, the way someone would typically phrase this is…” If a line introduced a (horrific) new notation, we might discuss what notations might be more natural and what kinds of notation might confuse or disengage a reader. Often, I would know what my students were trying to say, but their wording would have a different meaning. I might point out, “What this sentence actually says is… Is this what you meant? If not, what did you mean to say? How can we change this sentence to get that idea across?” We would also step back and talk about the structure of the paper, reorganizing material as necessary.

Here’s the final result, coauthored with four undergraduates. A significant portion of the body of this paper was written using this editing technique: During our editing sessions, my students weren’t just considering a static set of suggestions, scribbled in red ink.

During our editing sessions, my students weren’t just considering a static set of suggestions, scribbled in red ink. They were thinking about various aspects of mathematical writing. They were being educated on writing norms in our field. They were suggesting their own edits instead of blindly replacing their phrasing with my phrasing. The resulting papers have been significantly higher quality. Instead of taking me years of revisions to get a student paper into a publishable form, it would take me months, or sometimes even weeks. Now, I cannot imagine doing undergraduate research without this live editing process. 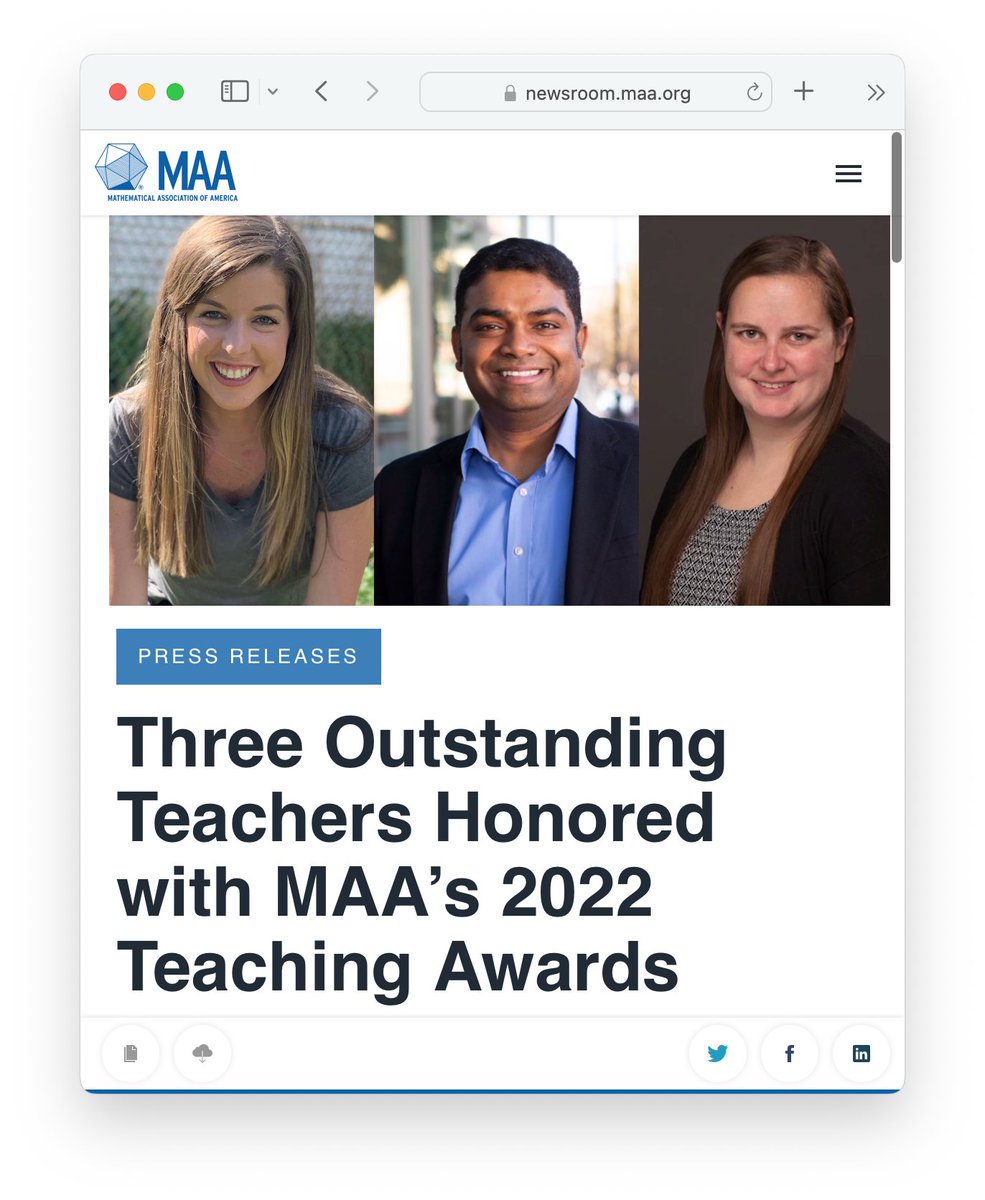 CURMCS: Math, CS, Stats · 1 month ago
@curmcs
We are excited to welcome Zhao Han @hanzhao from Colorado School of Mines @coschoolofmines as a new MCS CUR Councilor serving 2022 to 2025!💚 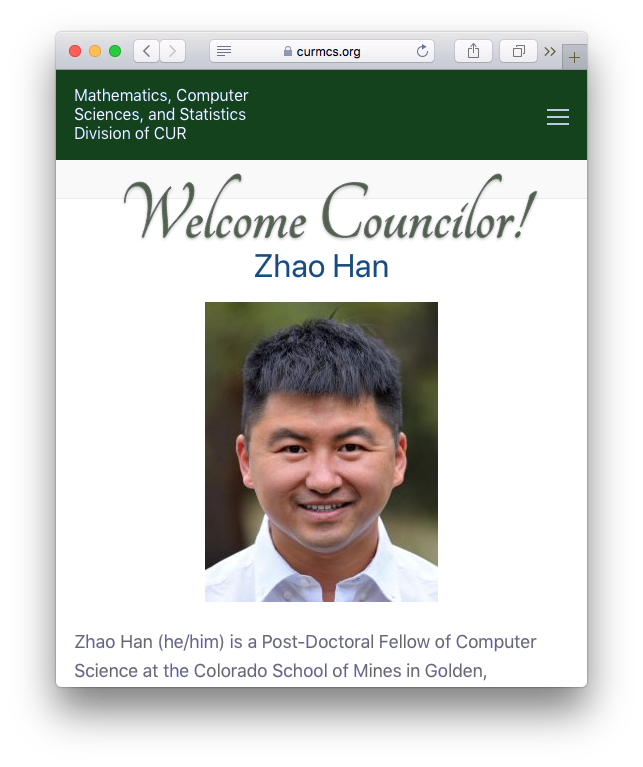 CURMCS: Math, CS, Stats · 1 month ago
@curmcs
We are excited to welcome Jonathan Weisbrod from Rowan College at Burlington County as a new MCS CUR Councilor serving 2022 to 2025!💚 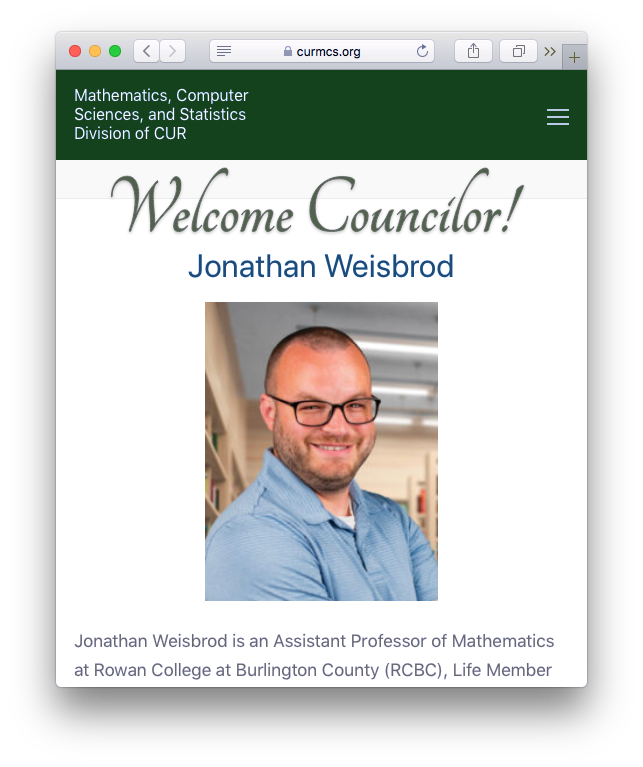 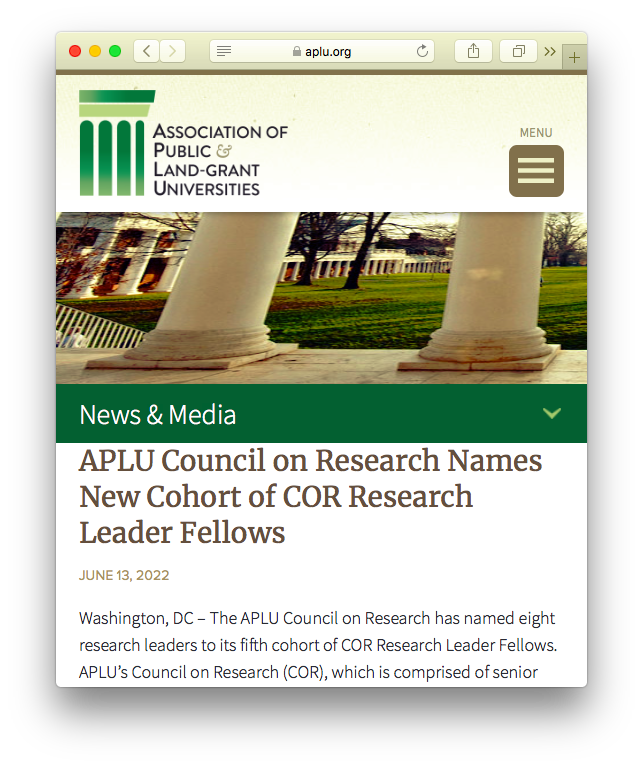 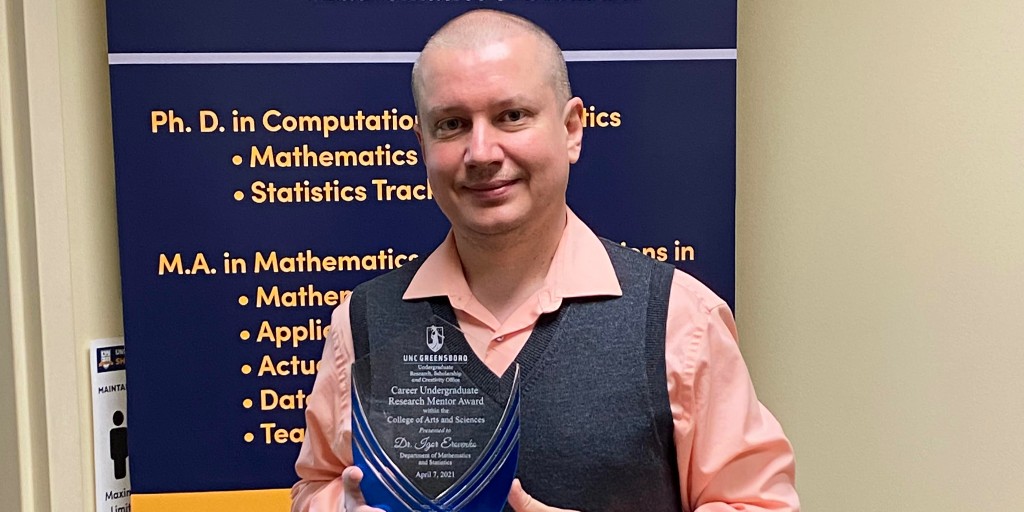 UNCG Department of Mathematics and Statistics@UNCGmathstats
Congratulations to Dr. Igor Erovenko ( @mathflipped) for receiving the Career Undergraduate Research Mentor Award within the College of Arts and Sciences! 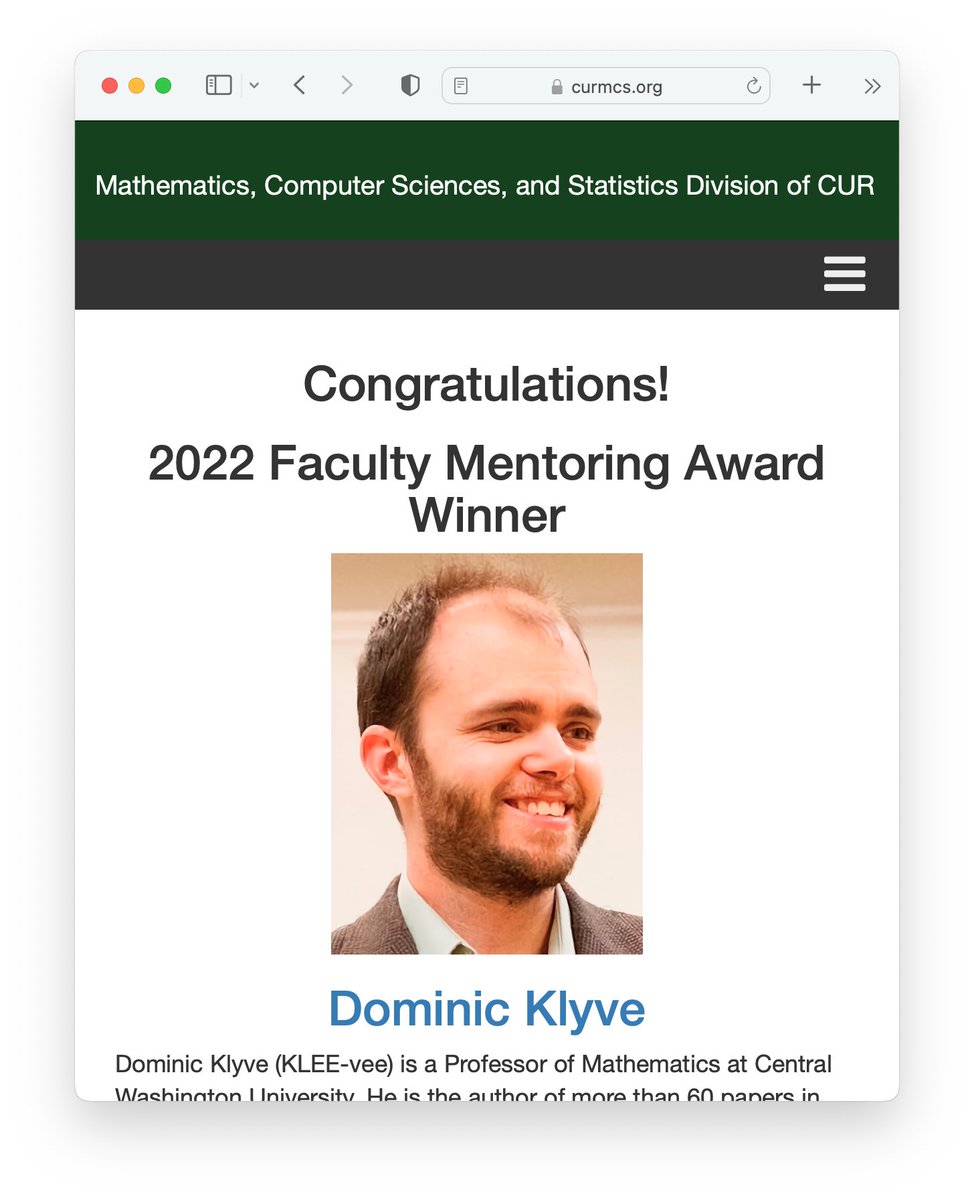